Alice in Typhoidland: Join Lewis Carroll’s Alice on a journey through the story of typhoid, from Victorian sewer systems to cutting-edge scientific research

A new exhibition tells the story of Oxford’s role in the fight against typhoid, from pioneering efforts to eliminate typhoid in the era of Lewis Carroll’s Alice in Wonderland to game-changing present-day vaccine trials.

Alice in Typhoidland opens on 21 January at two sites on Broad Street in Oxford: the Weston Library and History of Science Museum. The story of Alice Liddell, who inspired Lewis Carroll’s tale, was right at the heart of the earliest efforts to control typhoid in Oxford. Re-told through captivating digital animation and games, the exhibition takes visitors on a tour from Alice's home in Christ Church college to the city’s poorest areas, to show how the disease spread unseen through contaminated food and water, killing up to one in five of those who became infected.

University of Oxford research was instrumental in proving the effectiveness of the new ‘typhoid conjugate’ vaccine, and visitors to the exhibition will be able to hear the stories of the volunteers who tested it by drinking a ‘shot’ containing live Salmonella Typhi bacteria. Their efforts helped secure the go-ahead for a large-scale field study in Nepal; the results, published last month, showed the vaccine was more than 80% effective at preventing infection. It is now being rolled out in affected countries.

Linking the present and past of typhoid control, Alice in Typhoidland showcases video interviews with the Oxford 'typhoid swallowers' alongside unique historical documents, maps, and objects ranging from Victorian sewage pipes to new vaccines and antibiotics. 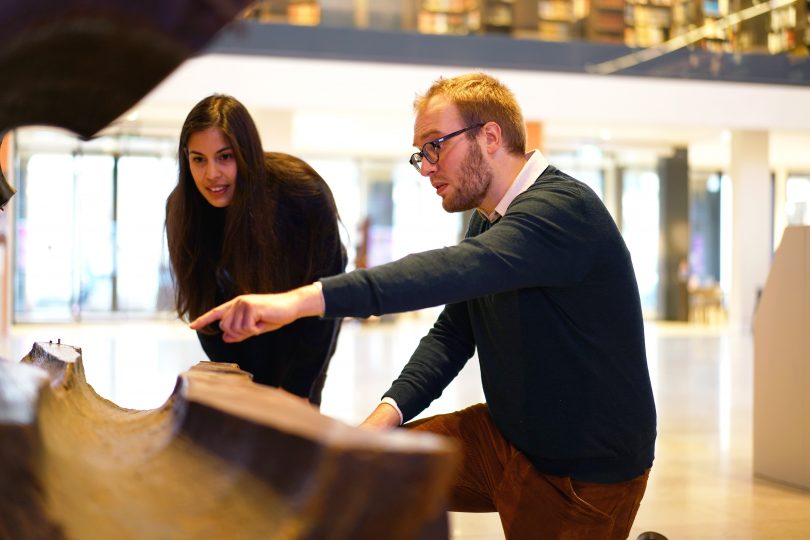 The story also highlights how collective action and new science helped control the disease. While Alice's father led campaigns for effective new sewers and water systems, her lifetime also saw the rollout of the first typhoid vaccines by the British army. The exhibition traces the science and controversies surrounding vaccination efforts from Alice's time to the present, and highlights the need for intensified international efforts against this preventable disease. Visitors will also have the chance to participate in ongoing Oxford research on public attitudes towards vaccine studies.

The history of typhoid in Oxford has been painstakingly pieced together by University of Oxford researchers Dr Samantha Vanderslott and Dr Claas Kirchhelle. They point out that while the disease may have been eliminated in most high-income countries, it still affects more than 11 million people around the world, every year.

Dr Vanderslott, of the Oxford Vaccine Group at the University’s Department of Paediatrics, said: “Alice’s family was repeatedly affected by typhoid, with her mother nearly dying during one bout. By bringing to life a little-known part of Alice’s story, we want to show how we all play a part in preventing disease; typhoid may be gone from the UK and other wealthy countries, but issues such as falling vaccination rates and resistance to antibiotics mean we cannot take protection from deadly infections for granted.”

Dr Kirchhelle, of the Oxford Martin School, said: “During Alice’s life, huge advances were made in tackling diseases such as typhoid. New knowledge of typhoid's waterborne transmission and bacterial cause helped boost investment in essential infrastructure such as sewerage and clean water supplies. It also underpinned medical advances such as vaccination and later antibiotic treatments.

“Today, in high-income countries, we take many of these things for granted. Our aim with the exhibition is to counter the myth of typhoid as a disease of the past and highlight the threat it still poses to global health. We explore how collective action and international investment in new vaccines, antibiotics, and basic water and health systems in resource-poor areas can help control this neglected threat.”

The advisor to the exhibition was Professor Andrew Pollard, Head of the Oxford Vaccine Group. Professor Pollard, who was part of the global research team for the new typhoid vaccine, said: “We are fortunate to live in an era when we can produce new vaccines, which are a critical tool to help in the fight against diseases such as typhoid. What Alice in Typhoidland highlights is that we still need a collective, global effort to fight disease on all fronts: from medicines and basic sanitation infrastructure through to public engagement strategies to increase vaccination rates.”

The exhibition partners are the Oxford Martin School, the Oxford Vaccine Group, the Bodleian Libraries and the History of Science Museum. The project has been generously funded by the New Venture Fund.

Following the conclusion of the exhibition in Oxford, it will travel to the Centers for Disease Control & Prevention David J. Sencer Museum in Atlanta, Georgia. A travelling exhibition will also visit Bangladesh, Nepal, Malawi and India.

For the one in ten who say they won’t take a COVID-19 vaccine, messaging that focuses on personal rather than collective benefits is more effective.

How do nucleic acid vaccines work?

Ever wondered what happens inside your cells when you are infected with a virus? Or wondered how the new COVID-19 vaccines work? The answer to both of these questions can be found in how our cells receive instructions to make proteins. Actually, our cells are a bit like factories...

COVID-19: how to tackle vaccine hesitancy among BAME groups

Samantha Vanderslott, Andrew Pollard and Seilesh Kadambari discuss vaccine uptake among Black, Asian and minority ethnic communities in an article for The Conversation.

Professor Katie Ewer (The Jenner Institute) and Dr Maheshi Ramasamy (Oxford Vaccine Group) appeared on ITV's This Morning on Wednesday 6 January to talk about their work developing the ChAdOx1 nCoV-19 coronavirus vaccine, all while juggling the demands of young families and home-schooling.

Learning games explaining the links between typhoid, sewage systems and food hygiene have won the gold prize at the Learning Technologies Awards 2020.